It is with very heavy hearts that we announce the sudden passing of our beloved patriarch, Forest Tardibuono. Known professionally as “The Guy in the White Hat,” Forest was a Realtor and Mortgage Broker for more than 33 years in Sonoma County, where he helped thousands of people purchase and finance their homes.

Forest left us on April 13, 2021, just days after his 64th birthday. He is survived by his loving wife, Lynn; his two sons, Ken and Phillip; his daughter, Megan; his three grandchildren, Braden, Kallye, and Micah; and four of his younger siblings. He is preceded in death by his younger brother and older sister.

Forest was born on April 14,1957, in Irumagawa, Japan, where his father was stationed in the Air Force.

As a military family, the Tardibuonos moved often, but they eventually settled in Arizona, where Forest graduated from high school and then Arizona State University, which he attended on a debate scholarship. He then studied law at the Western State University in La Jolla, Calif., where he met the love of his life and future wife, Lynn.

He and Lynn quickly decided to move north to Santa Rosa, where they founded Sun Pacific Mortgage, in 1990, which evolved into Sun Pacific Mortgage and Real Estate as they expanded their services and became licensed to buy, sell, and finance homes throughout California.

When Forest wasn’t working, he was an avid golfer. He never missed his weekly game with long-time partners and friends. He also loved fishing; it was a sport he shared with his brother and sons and which he enjoyed teaching his grandchildren.

If he wasn’t fishing or golfing, Forest was likely in his vegetable garden. He was famous for growing the biggest pumpkins and zucchinis around, and he often gifted these enormous squashes to friends, family members, and neighbors alike.

In addition to being a father, successful business owner, husband, golfer, fisherman, and gardener, Forest was a gifted comedian. In fact, he was one of the funniest people around and often had those in his present company in hysterics!

But what Forest was most known for was his kind and generous heart. He was constantly over-tipping, whether that was to the waitress at his favorite restaurant or to the young kid who worked behind the window at McDonald’s. He also spearheaded the charity drives at the North Bay Association of Realtors-Santa Rosa Chapter and was often the first person to open his checkbook. And he loved to support Santa Rosa’s local businesses; he preferred to buy everything from lunch to Christmas gifts from the mom and pops rather than the big chains.  This was in addition to his philanthropic endeavors with his Church and charities to the tune of hundreds of thousands.

He will be dearly missed by his family, friends, business associates, and fellow church members.

As a tribute to “The Man in the White Hat,” do or say something kind to someone today. We know Forest would appreciate it!

And, we will continue his legacy here at the family company, helping many individuals and family with our private money programs.

Forest Tardibuono – “The Guy in the White Hat” 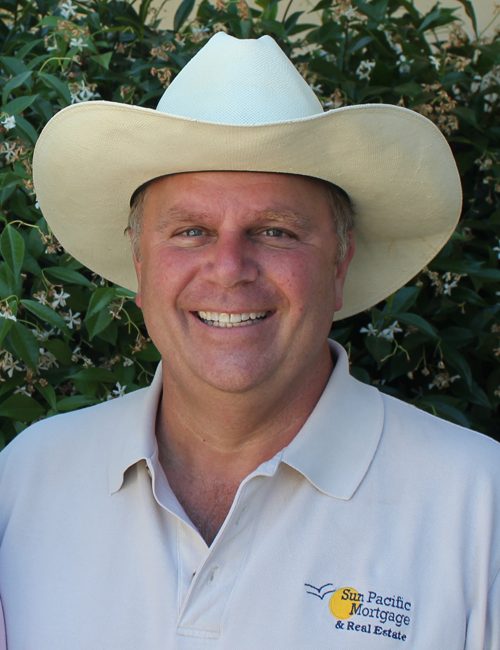 Hello!  My name is Forest Tardibuono and I am “The Guy In The White Hat – Your Hard Money Lender” of Sun Pacific Mortgage & Real Estate.  I am the proud Broker and co-owner of this family owned and operated company since 1988 – when it was established in Sonoma County, California!

I take pleasure in working hard to help others via the Hard Money/Private Money loans I offer [to those turned down elsewhere]. Having helped literally thousands of borrowers, buyers, investors, other Agents and Brokers, I continue to strive to deliver the most honest and friendly service to all those I am in contact with.    Our company success is that we really like people and helping them succeed.  I do so by taking extra care to educate our borrowers, buyers and investors about the current market.  The proof of our success are earlier customers returning and referrals from them to friends, family or even simple acquaintances.  I look forward to being able to help you or someone you know!

Thought I’d tell you a bit about myself as my kids have nagged at me to let people know my interesting life history up to now…they say it answers why I came to be a Broker and “The Guy In The White Hat”, taking a sincere interest in helping others. So here I go:

I was born in 1957 in Irumagawa , Japan at the Johnson Air Force Base. I have 7 siblings – with 2 sets of twins – so I had my hands full helping out as the eldest!  As my father was in the Air Force, we travelled a lot.  One can say I was a military brat until 1972 when my Dad retired at Williams Air Force Base outside of Chandler, Arizona.  We had moved back and forth, living in Illinois, Japan and finally settled down in Arizona.  My Mother was a teacher at the Catholic Grade school I attended and she was my teacher through my 7th and 8th grades for English, art and music.  I graduated Chandler High School in 1975 where I succeeded in achieving a letter in football, wrestling and believe it or not, in Debate!  I also must mention my 7 proud years of newspaper delivery of “The Phoenix Gazette” and the Sunday morning paper “The Arizona Republic” where I worked hard and was rewarded with paper boy of the month and year.

After College I went to Arizona State University on a debate scholarship.  Graduated with a Bachelor of Science Degree in Business and Public Administration in 1982 and also joined the national social fraternity Phi Sigma Kappa.  I moved to La Jolla, California and did first year’s law studies at Western State University College of Law where I met my lovely future spouse and co-owner, Lynn.  We married in 1987 and chose to move to Santa Rosa, CA. in December of 1987 because of how beautiful it was here.   Our daughter, Megan, was born January 30, 1989 and happily joined our family of Lynn’s two sons from her previous marriage: Ken,7 and Phillip, 3.

We opened Sun Harbor Mortgage on January 11, 1988 which was a branch of a San Diego Mortgage company. Since we had a true personal desire to help others in this county with honest financial services, we bought them out in June 1990 and changed the name to Sun Pacific Mortgage which has since evolved in 2004 to Sun Pacific Mortgage & Real Estate as we offer both real estate and mortgage/lending services.  Throughout my tenure as the Broker, I worked diligently to deliver the best service to all our customers and received the prestigious Model-Of-Admin-Know-How Award from WISE International for 10 consecutive years, beginning in 1997.

On weekends I enjoy fishing, gardening and golf – as well as a variety of other activities including spending joyful time with my two grandkids, Braden who was born July 2009 and Kallye who was born February 19 2012!

Feel free to call me up at 707/523-2099 to ask any questions about real estate financing, hard money loans, real estate investing, advice on some other financing option or even just to refer a friend or family member in need of my services or to get help yourself.